There can be no denying that the passing of Queen Elizabeth II, whom I had the rare privilege of not only meeting, but actually exchanging informal pleasantries with during a chance encounter at a birthday celebration for her son, was a profoundly sad occasion for the people of the UK, most of whom have known no other monarch. But while the reassuring presence of this beloved national matriarch will certainly be missed for years to come (and not just by British subjects), her disappearance from the scene need not be a cause for despair, thanks to the sweeping intellect, integrity and determination to preserve the planet (as well as the kingdom) for future generations exhibited by the heir to the throne.

The ascendancy of King Charles III (even in a position that involves wielding influence rather than power, although who I believe will never be quite comfortable with the title “King”), is probably the best thing that could have happened at the very moment in history when climate change seems to have quite suddenly reached critical mass (not just in outposts of Britain’s former colonial empire, but in the Mother Country itself), He is a pragmatic thinker, familiar with the intricacies and underlying complexities of all the issues involved, and, in fact, the one who acquainted Al Gore with the urgent nature of this intensifying global crisis at a time when few if any politicians were even aware of it. His passion and vision for what a sustainable world could look like are absolutely mind-blowing. His book “Harmony” (the contents of which I was given the task of coordinating) and the documentary based on it (which he funded and agreed to host) are testimonies to his personal commitment to this cause, starting with the opening scene in which he walks through a field of red clover and explains its importance in carbon sequestration.

As The New York Times noted on the day after he became king:

“Charles has become, at 73, a self-assured, gray-haired eminence, steeped in causes like climate change and environmental protection, which were once quirky but now seem peculiarly in sync with the times…. He founded formidable charities like the Prince’s Trust, which has helped nearly a million disadvantaged young people, and championed causes like sustainable urban planning and environmental protection, long before they became fashionable.”

On a personal note, Charles (while he was still HRH Prince Charles) is someone I talk about in a new book I have been working on as a quintessential example of a “giver”—an impression I got of him during a meeting that I and my good friend Dave Carter once had with him at his home, Highgrove: 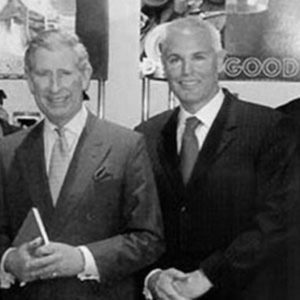 “It was just the three of us, and I distinctly remember how the prince, despite all the servants at his command, fetched the tea and poured it himself and refilled our cups— he wanted it to be clear that he was serving us. Our reason for being there was that the heir apparent to the British throne was anxious to learn from Dave what he could do to promote organic agriculture, what practices he could put to use on his own organic farm as an example to those who visited it. It was great just to watch how these two individuals, whose renown and responsibilities were so markedly different, could come together and talk about the selfless activities they were willing to assume to make the planet a better place.

“The prince, we discovered, was supporting 19 personal charities and reportedly spent over 250 nights per year engaged in fundraising for causes. That he is one of the most privileged individuals on earth can’t be doubted, of course, but when you get to know him as a human being, his virtues and values, you can’t but help be inspired. He is, without question, a giver.”

And I might add that right now, we desperately need all he is capable of giving in reversing the ravages of the climate change that have suddenly become all too real—and far too urgent for anyone who resides on Earth to ignore any longer.

In essence, this unassuming yet incredibly knowledgeable new sovereign is a guy who, more than anyone I’ve ever met, understands the unprecedented problems our planet now faces and how to find solutions. In fact, I would go so far as to say that fate couldn’t have given us a man better suited to his role on the world stage than Charles just when sustainability has never been more critical to our survival as a species.

How corporations could become standard-bearers in the pursuit of perfection

Whether on land or sea, factory farms are a shameful waste of our resources